Explore the breath-taking beauty of Alaska’s rugged wilderness with our Alaska cruises. From the snow-white tips of gleaming glaciers, to the cobalt blue, crystal-clear seas; only on an Alaskan cruise holiday can you see so much natural beauty.

With a culturally-rich and fascinating past, and a vibrant and thrilling present, discovering the faraway feasts of Asia will be an unforgettable worldly experience. Treat yourself to a taste of it all, with an Asia cruise.

Australia and New Zealand are two cruise holiday destinations that are unlike any other. Where Australia takes the crown for the flattest land mass, New Zealand is extremely mountainous.

Cruise to Canada, where you can enrich yourself with exquisite charm, rich history and breath-taking natural beauty of New England and Canada’s eastern seaboard. Sail along and see the vast cities of Boston and Quebec.

With a wealth of wildlife and natural diversity, Galápagos is a nature-lovers dream. These stunning islands are home to almost 2,000 rare and unique species that aren’t found anywhere else in the world – making it an unforgettable trip for any explorer.

This part of the world is famed for being a picturesque paradise, and when you visit heavenly Hawaii, it’s not hard to see why. You can’t miss the vast, lush landscape and the technicolour rock face of the colossal volcanoes from which this unique island.

It’s easy to see why the Mediterranean is a world-renowned holiday destination, with its quaint fishing villages, stunning scenery, delicious cuisine and warm climate. From rustic farms to bustling cosmopolitan cities, there’s something for everyone.

With its intriguing culture dating back thousands of years, breath-taking architecture, idyllic beaches and sensational shopping opportunities; it’s no wonder Dubai and the Middle East make for some of the most desired cruise destinations anywhere.

The Northern Europe cruise region stretches from the British Isles right through Scandinavia, all the way to St. Petersburg, Russia. Amazing historical and cultural sites await passengers, as well as a huge variety breath-taking scenery.

A cruise through the Panama Canal is an exciting and exhilarating, a spectacular marvel of engineering. Experience the thrill as the six immense locks raise the cruise ship from sea level up to 85 feet, and then gently lower it down.

For any explorer, South America is a rich, melting pot of cultures that are inspired by passion, food, and nature. Boasting beautiful beaches, exotic wildlife and a rich heritage that dates back to ancient civilisations, make it the perfect destination.

Crossing the pond is more than a means to an end in this collection of cruises – you’ll relive the golden age of cruising on a transatlantic cruise. For those who want to soak up the beauty of the ocean a Transatlantic cruise is ideal.

Ships on Azamara Club Cruises aren’t so large that they’re daunting – you won’t ever feel lost on board. However – they’re certainly not too small either and you’ll never run out of things to do or people to meet.

Home of the brave, and land of the free, the United States of America is a country brimming with different notions of culture. It also offers a staggering range of opportunities when it comes to travel, with bustling metropolises, mountains, beaches, rainforests, deserts, canyons, and more. Hardly surprising then, that travelling by sea would offer just as many unique opportunities. There are dozens of USA ports, new and old, modern and stylised, big and small, and here are just a few of the most popular: 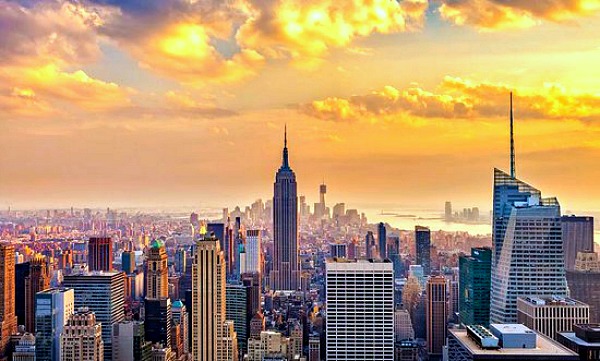 Known for New York City and the Niagara Falls, this state brings you the Empire State Building, Statue of Liberty, Central Park, the Hamptons, the Montauk Lighthouse, and the list goes on! This is a state of opportunity, of inspiration, as seen in countless musicals, movies, and novels. It’s vast, but it’s the kind of place you’d love to lose yourself in. New York’s port is the third-largest in America (after Los Angeles and Long Beach), and this is probably where you’ll come in on those legendary transatlantic cruises.

Just so you know, there are actually 3 ports in the Hudson Bay, each with their own partnered cruise lines. The port of New York, Manhattan, the port of Brooklyn, and the port of Cape Liberty (which is arguably in New Jersey). Brooklyn’s port is in Red Hook, relatively new having opened in April 2006, and, with just one berth, is generally used by Cunard’s Queen Mary 2 and Princess cruises. Royal Caribbean and Celebrity cruise ships favour Cape Liberty, just 7 miles from NYC, and the remaining lines gravitate towards New York, Manhattan! From here things can go North or South. Cruises to Bermuda, Canada and the Caribbean all set sail from here (and don’t forget you can travel the entire Atlantic Ocean on a transatlantic adventure)! 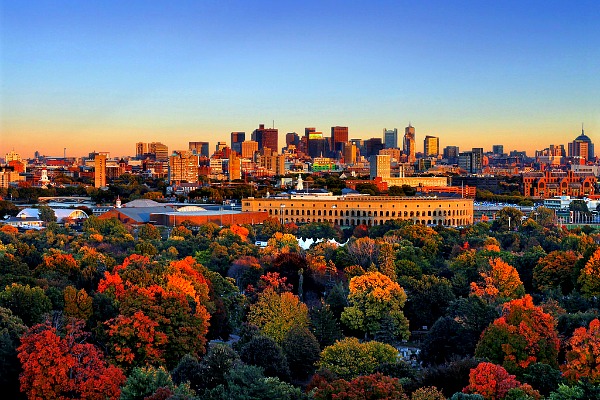 Massachusetts is written in New England legend because of its colonial history. Plymouth, where the first pilgrims landed, the American Revolution of Boston, and the war at Bunker Hill, all ring out of a state that’s rich in American history. It’s also a state rich in arts and culture, proud of sport (you might have heard of the Red Sox), and it’s famed for its beauty come fall.

Found on the South Boston waterfront, there are 3 main terminals (the Main Terminal, 88 Black Falcon, and Terminal 2) just 10 minutes from Logan International Airport, across the harbour. The area has undergone huge renovations since 2010, to the tune of over £10 million. From Boston, you’re all set to explore New England (by way of Maine and New Hampshire) and Canada (specifically Nova Scotia, Newfoundland, and Quebec)!

With the Atlantic on one side, and the warm swell of the Gulf of Mexico on the other, Florida is the southern-most state of the US, and proud owner of hundreds of miles of beach. It’s a state of paradise, developed out of its proximity to the Caribbean, you can just feel that Latin-American influence in the streets, and it makes for a wonderful experience. It’s famous for its swamps, for Disneyland, for Kennedy Space Centre, for its music, culture, arts, and, well…cruises!

The port of Miami (affectionately nicknamed the Cruise Capital of the World) is home to 12 cruise lines, accommodates more than 4 million passengers each year, and has 7 incredible terminals decorated with dramatic public art. Fort Lauderdale (Port Everglades) is close-by, and just 2 miles from Ft. Lauderdale Airport. Orlando’s Port Canaveral is one of the busiest but least congested cruise ports, though it’s quite a way from Orlando International Airport (54 miles). Terminal 8 is dedicated to Disney cruise lines, whilst Terminal 1 caters to Carnival vessels, and other lines sail from 5 and 10.

Typically, ships setting sail from Florida are headed South, either for a Caribbean adventure, or to discover South America and the Panama Canal. 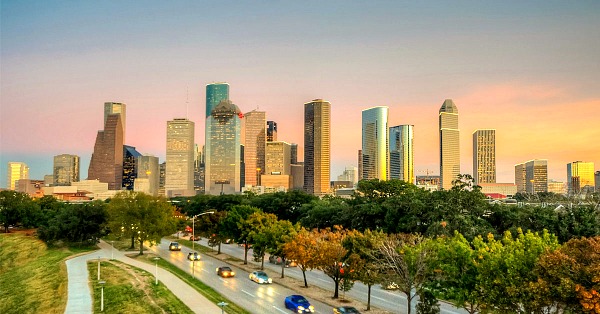 Texas has its own legend, just as diverse as California, with the appeal of Florida, almost as bustling as New York, and complete with the rugged appeal of Massachusetts. It’s huge too, bigger than half of Europe combined! It’s got its unique country culture, the kind you’re familiar with on TV, the legendary Space Station in Houston (where they certainly don’t “have a problem”) and its renowned Fine Arts Museum, Austin’s impressive music scene and LBJ Presidential Library, Big Bend National Park, Mexico just across the Rio Grande, and quite a bit more.

Houston’s cruise terminal is the less popular in Texas, outdone by Galveston, despite how big it is. Bayport (Houston) is actually in Pasadena, not far from Houston’s airports and excellent restaurants. Galveston’s port is on Harborside Drive, and following over £50 million worth of investment has plenty of modern boarding and check-in spaces, digital maps, and terminal-wide Wi-Fi. You’ll be heading South from Texas, to begin your adventure in the Caribbean and South America, with Terminal 1 dedicated to Carnival ships, and Terminal 2 to Royal Caribbean. 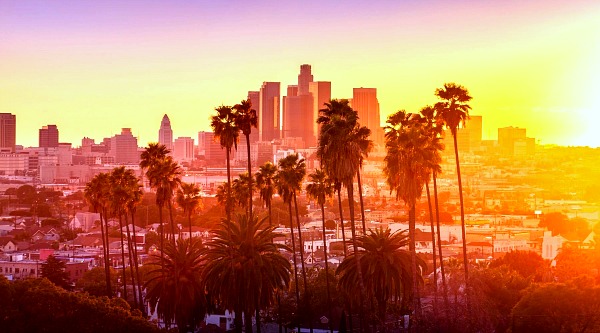 California is full of contrast, with sun-kissed surf and beaches in the south, and moody redwood forests in the north. It’s that place that everyone wants to be, it’s got Hollywood, it’s got the Mojave Desert, Alcatraz Island, and San Francisco’s Golden Gate Bridge. It’s forward thinking and yet relaxed, the perfect place to have an adventure; hitting up the SoCal beaches, enjoying wine-country festivals, snowboarding at Lake Tahoe, or enjoying a quick cruise getaway from one of the local ports.

In Los Angeles, most ships sail from the World Cruise Centre in San Pedro (just 20 miles from LAX Airport, and Hollywood). Other cruise lines use Long Beach Cruise Terminal, only a couple more miles from San Pedro, and 5 miles from Long Beach Airport. San Francisco’s bustling downtown waterfront normally sees ships dock at Pier 35 and the relatively new James R. Herman (Pier 27) terminal along the Embarcadero. Finally, in San Diego, cruise ships dock at B Street Cruise Terminal in San Diego’s harbour, just a 15-minute walk from Little Italy and the Gaslamp Quarter. From these 3 hotspots, you can discover California, and make your luxury getaway North to explore Vancouver and Alaska, or South to explore Hawaii, the west coast of South America, the Panama Canal, and even the legendary Galapagos Islands!

Founded in 2013, the award-winning LoveitBookit has grown into one of the UK’s leading Cruise Specialists. Our dedicated team are on hand to help you discover your perfect cruise holiday.